This is a question that Freedom House, an independent private organization supporting democratic rights and freedom worldwide, has been trying to answer since its inception in 1941. To this end, the organization launched the Freedom of the Press study in 1980. In addition, Freedom House annually compiles the Press Freedom Map, in which it addresses the media independence in 193 countries and disputed territories, by rating each country’s freedom of the press from 0 (freest) to 100 (least free). Accordingly, countries are split into three categories: “free,” receiving ratings from 0 to 30, “partly free,” scores being between 31 and 60 points, and “not free,” for countries with assessments between 61 and 100. The Freedom House ratings consider all types of media in a country, from the traditional print, radio and TV, to the latest forms of news enhanced by the Internet.

Statistics aside, just a simple look at the Press Freedom Map will make anyone rethink freedom in the world. In 2010, 69 countries enjoy an unfettered press thus leaving the rest of 124 equally divided between “partly free” and “not free.” A more striking evaluation however comes when looking at the Freedom House population chart: from the estimated total of 6.8 billion, currently only 1.8 billion people enjoy a free press. That makes only 16% of the people worldwide benefit from the fruits of an independent media, like a healthy democracy, high government accountability and sustainable economic development. 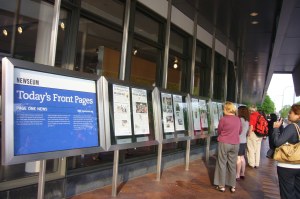 Maybe there’s no surprise that countries like the United States of America score high on the “free” press ratings – though not highest, despite the historical constitutional protections of press freedom and expression. According to Freedom House, the Scandinavian countries score as the freest ones in the world when it comes to media, while North Korea leads on the opposite side of the spectrum. Interestingly, Jamaica accounts for a freer press that the U.S. And despite harsh economic conditions, African countries like Mali and Ghana are leaders in free media on the continent.

But in countries like Vietnam, the situation is considerably different, with journalists facing fines and prison time for any reports that are presumed as critical or “reactionary” by the communist government. With the online world expanding, so does the number of “cyberdissidents,” who have been put to a lot of pressure by a government trying to suppress its critics and tighten control. One of them is Internet writer Pham Hong Son, who spent more than four years in jail and other three under house arrest for translating and republishing an article entitled “What is Democracy?,” article that originally appeared on the U.S. State Department’s website. In April 2011, Pham Hong Son was detained again for more than one week for supporting another pro-democracy activist, notes Radio Free Asia. As Freedom House writes, even foreign journalists are under strict control when entering and while in the country, and their work has to be subjected to a Ministry of Affairs review before leaving Vietnam. Situations like these are not uncommon in the “not free” press world.

Still, the current wave of revolutions in Africa and Middle East stress the fact that people cannot remain deaf to the voice of freedom and that sooner or later most of this world’s citizens will enjoy the freedoms they were born with. Journalists enable this outcome, by travelling the world and risking their lives to carry on the stories of the voiceless. A closer look at the Freedom House Press Freedom Map will make any journalist realize that there are still many stories to be told…